your guide to alternative-economy businesses 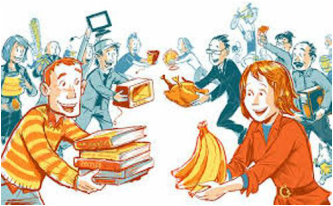 WHAT IT IS:
A barter (or bartering) is an exchange between two parties using goods and services for payment instead of currency.

HOW IT WORKS:
The barter system enables two parties to exchange goods or services based on mutually perceived value.
To illustrate, a plumber can fix a baker’s sink, for which the baker would normally have paid $100 for the service. Instead, the baker gives the plumber $100 worth of his baked goods.
Another example would be a photographer agreeing to photograph a dentist's wedding pictures in return for some dental work of equal value.
These transactions do not involve any exchange of currency, however, each party benefits from the transaction.
from www.investinganswers.com/financial-dictionary

Barterworks in Kitchener, Ontario.
​BarterWorks is a local trading organization of individuals, businesses and community groups, Members trade goods and services through the exchange of barter currency or a combination of barter currency and Canadian dollars within the Local Exchange network.  Exchanges can occur online with members, or at monthly trading markets.  A Barter dollar exists only as an account entry on the System. You can't physically touch a Barter dollar because no bills, notes or coins are issued.  A Barter dollar is considered to have the same value as a federal dollar. However, it is used only within the BarterWorks system; it never leaves the system and has no value outside of it. It cannot be converted into cash but rather is used along with cash.

Bunz Trading Zone
Bunz was begun in Toronto and is growing exponentially as a universal online trading platform with local groups in various cities.  Members list what they're looking for and what they need. No money can be exchanged, only trades of goods or gift cards or services.  Facebook groups enable members to find exchanges almost instantly.